No free Falafels in the Middle East...

No free Falafels in the Middle East.... 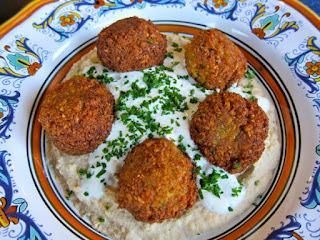 Just about everyone who visits Israel (or anywhere in the Middle East, actually) has certainly tried falafel.  Those yummy fried balls of mashed chick peas are delicious, addictive and make a relatively nutritious meal - and they are very affordable.  Always reasonably priced, falafel works for those traveling on a budget.  But, there is still a cost - as there is with everything, right?   Well, not everyone seems to believe that...

With the recent flurry of treaties and accords between Israel, the UAE, Bahrain and the USA there are those who seem to feel that Israel got what it wanted AT NO COST!  Israel, which has always desperately craved the recognition of ANY country in the world, has always prized recognition by those of our Arab 'neighbors'  the most.   There are people who are actually celebrating what they feel is a total bonanza for Israel with no price to pay.  But, let's take a look at the issues behind the dazzle and see what the REAL DEAL actually is.

We keep wondering (or, we should be)  about the sale of F-35 jets to the UAE, Israel "suspending" the extension of soverignty in Judea & Samaria, and the creation of a PA ('Palestinian Authority') State.  Let's take a look at each of these elements - but firstly, you have to understand the assumption that this is based upon - the Trump 'Peace to Prosperity' plan, referred to as the, "Deal of the Century" - gotta love those catchy nicknames!  In it, a "Palestinain" State is to be created - an independent country which has never existed before in the history of the world.   And where is it supposed to go?  Manitoba, Canada?  Kruger National Park in South Africa?  No...in Judea and Samaria - the Biblical Heartland of Israel. 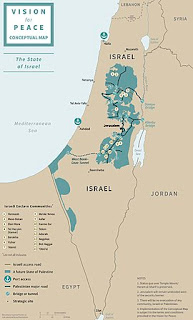 This 'plan' cuts off 70% of Judea and Samaria (what the world foolishly calls, the "West Bank" - those are our Eastern Hills...the EU needs to get a good map...) to create this PA State.  It also calls for several other areas of land, all illustrated on the map above - including a tunnel to connect this new entity with Gaza.  But to WHOM does the Land belong?

There is NO mention or thought of allowing ANY foreign entity to exist...but we didn't listen so well back then, and people are NOT listening now, either...

"...I brought you up from Egypt and I took you into the land I had promised on oath to your fathers.  And I said, 'I will never break my covenant with you.  And you, for your part, must make no covenant with the inhabitants of this land; you must tear down their altars.' But you have not obeyed Me - look what you have done!   Therefore, I have resolved not to drive them out before you; they shall become your oppressors, and their gods will be a snare to you."    Shoeftim 2:1-3

So, for the 'gods' of "recognition," money/investments and wanting to be liked by the world, we're ready to turn our backs on our inheritance?  Uhh...how well did that work out for us, previously?  And do not think for one minute that the issue of the 'throwing us a bone' of giving Israel 30% of Judea & Samaria to declare soverignty (they call it Annexation) is something that is merely delayed.   I am not even touching upon the issue of WHO gave the USA (and I LOVE America...) the right to divide the Land of Israel?  It is the eternal possession of the People of Israel, given to us by HaShem.  It is not a property in the game of Monopoly that can be bought, swapped or traded.

The UAE has made it VERY clear that the issue of 'annexation' (it is SOVERIGNTY - you cannot annex part of your own country) was stopped by them to make the deal with Israel.  They have said it - loud and clear.  We can plug up our ears and say, "but it's not in the accords..." - but it IS out there in the open.

The essence of this deal AND plans to bring in the Saudis (am I the only one that remembers 9/11?) is a "Two-State" Solution....the Trump 'Deal of the Century' CALLS for it...acceptance of it and these accords/agreements/deals are leading, GOD FORBID, to the division of the Land of Israel.  And the sale of F-35's to the UAE is just icing on the cake - now that they're going to be at 'peace' with Israel Srangely, we were never at war with the UAE.  Should we also be signing a 'peace agreement' with Canada?  Hmmmm....

Once the USA agrees (and they will....) to sell F-35's to the UAE - how on earth will America deny the Saudis when THEY request to buy them.  Or, when America's great allies, Egypt and Jordan want to buy them?  Do you know how precarious King Abdullah's position in Jordan is now?  Do you think there will never be another regime change in Egypt?

Go back and look at the Trump plan map - you see those little numbered circles?  Those are groups of Jewish communities that would be Surrounded by a PA State.  Have you seen the signs in front of the PA occupied areas in Judea & Samaria now? 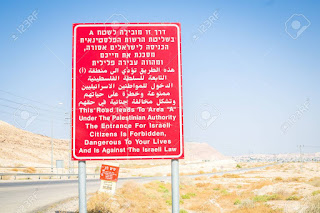 Before you cheer these 'Abraham Accords' know what is at stake - Judea & Samaria...a "Two-State" solution and the division of the Land of Israel...

Posted by Hanoch at 8:53 AM No comments:

A Good Report from the Land