Who are the 'Watchmen on the walls of Jerusalem' that the Prophet Yeshayahu (Isaiah) speaks of? 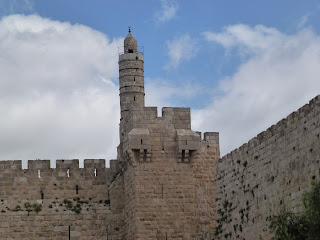 For his Bar Mitzvah at the age of 13 (reaching the age of religious responsibility), every Jewish boy chants a portion of the Prophetic readings.  This is called the Haftara, and it is a section of the prophets chosen specifically because it matches up (thematically) with the Parsha, the weekly Torah portion.  For my Bar Mitzvah, I chanted the Haftara from Parshat Nitzavim which covers part of Yeshayahu (Isaiah) Chapter 61, all of 62 and part of 63.  There are so many astounding verses in these chapters, and without realizing it, they have set the tone for how I have tried to live my life. 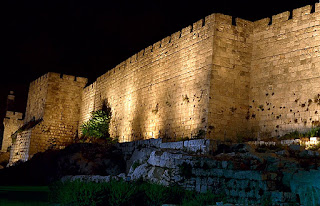 One of the most intriguing ones though is when the Prophet relates the prophecy given to him by HaShem (God) which states, "I have set watchmen on your walls, O Yerushalayim (Jerusalem), who shall never hold their peace day or night..."  (Yeshayahu 62:6).  I used to ponder this verse, wondering who could these, "watchmen"  possibly be.  And it has only been over the last few decades that this has actually become clear.

It has only been within the last thirty years that people of all faiths, from around the world have been woken up to the deep connection that they have to both the Jewish people and the Land of Israel.  Largely (although not exclusively) coming from a background in Christianity, people, who in many cases have never met a Jewish person in their lives, begin to feel an inextricable bond with Jewish people around the world, but particularly in Israel.

I have always been astounded at the phenomenon of how people, who are convinced they have no link to Israel or to it's people, wind up coming here - often not knowing how they 'chose' or 'decided' to come to Israel in the first place.  It's because it wasn't them that made that choice or decision.  They received a Divine invitation to come to His Land, to begin experiencing what He had in mind for them.  As a Licensed Israeli Tour Guide I meet people all the time who tell me they don't have any Jewish relatives and had never even met an Israeli until they arrived at Ben Gurion Airport!  And yet, they describe the intense emotions upon seeing Israel as the plane is preparing to land, their uncontrollable weeping and sense, after stepping off the plane of 'being at home.' It's something that does not happen any where else in the world; only here, in Israel.

The links that these lovers of Israel develop are often channeled into real and ongoing support for Israel on all levels - , political activisim, buying Israeli products and bringing others here to have their own, life-changing Israel experience.  THEY are the 'watchmen' that Yeshayhu spoke about!!  They are the ones standing alongside Israel and the Jewish people.  Whether or not they feel that they are brothers & sisters, or 'spiritual kin' - they have been called to BE those watchmen on the walls.

We have spent too many years focusing upon those things that could potentially divide us.  Those  walls of mistrust, built up over two millennia of horrific persecutions are being broken down by pure, unconditional love and respect.  Instead of talking about each other, or at each other, we are actually talking to, each other...

This is the era when we have begun to see prophecy actually being fulfilled before our very eyes.  And those who are flocking to Israel and to stand with us aren't coming just to see cool sites.  They are coming because they have been called to be the watchmen on the walls of Jerusalem; nothing less. May we embrace these watchmen and work together on behalf of our beloved Eretz Yisrael - the Land of Israel.

With love & hugs from the Chosen Land,

A Good Report from the Land